In an isolation wall, what is better: More mass, or more wall cavity depth?

A place for practical examples showing many aspects of studio design and construction.
Post Reply
1 post • Page 1 of 1

In an isolation wall, what is better: More mass, or more wall cavity depth?

Someone on another forum just asked me about the difference between mass and cavity depth in an MSM isolation wall, wanting to know which is more important, and how to figure that out. A great question! So I'm posting the answer here too:

There's a complicated relationship between the mass and the air gap, as both of them effect the overall isolation of the wall, but basically the depth of the air gap mostly effects the MSM tuned frequency: the bigger the cavity depth, the lower the frequency, which is good. Conversely, mass mostly affects the amount of isolation AT THE FREQUENCY SET BY THE AIR GAP. More mass = higher isolation.

There's a graph that explains this quite well in the old-but-very-valid research paper known as the "Wyle Report", from way back in 1973: 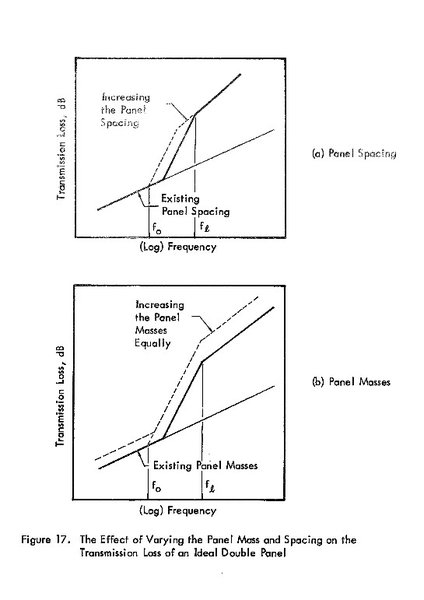 That makes it fairly simple to understand, I think.

If you want to take a look at the entire report, and really get into the nitty-gritty of how isolation works in MSM walls, you can find it here: link to document library. Its right at the top of the list.