Not really related to studio acoustics, but fascinating nevertheless: You can now buy the world's loudest sound source, for a mere US$ 11.99. 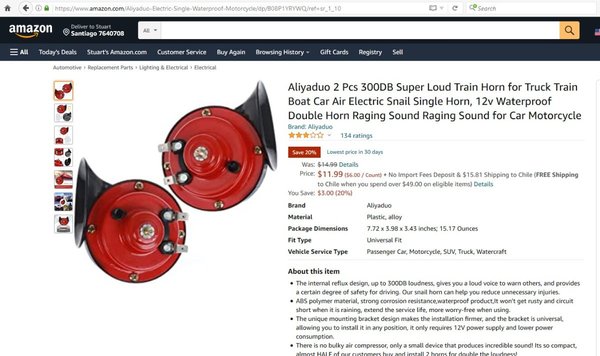 For that incredibly low price, you can produce the loudest sound ever heard on Planet Earth. Louder than a dozen atomic bombs all going off at once, right next to you: Louder even than the Krakatoa volcano! Which was just a measly 280 dB ( https://www.google.cl/search?q=how+loud ... a+eruption ) .

Impress your friends! Blow your neighbors away (literally). Destroy the planet! All this, for only US$ 11.99, and it runs off your car battery.

(Methinks the perpetrators of this marketing hype don't have the vaguest clue what a "decibel" is, nor how to measure it validly...)

I was amused by the comment by one customer who complained it doesn't sound like a train.

Although your post Stuart brought me a memory of one of the most impressive sounds I've ever heard. Many years ago I visited a sandstone quarry where they cut rock from a pit, then cut & polished it on site. A very impressive facility with serious craftmanship. They were blasting the stone face when I visited and they asked if I would like to directly witness this happening. An offer I could not refuse.

As I recall from memory... they had studied the rock formation & drilled a small diameter hole several meters deep with an auger. This was packed with explosive. I arrived just as they were preparing the charge for detonation. They did some final prep, then we all sheltered behind an excavator, really not that far from the charge. Maybe 15 metres?

There was silence, then a sound like you have never heard before. Utterly overpowering and enveloping, yet over in an instant. Even though I was prepared for it I jumped out of my skin

Big grins all round from the quarrymen

We strolled over to the blast site and a perfect fracture many metres long had formed in the rock face, exactly where they wanted it. Perfect job.

Sounds like a hell of an experience, Jennifer! Wow. I've never experience anything like that, but I'd love to. Pity you didn't have a sound level meter with you: I wonder how loud that really was?

One thing on my bucket list, that I'm told is way impressively loud, is to watch a rocket launch from Cape Canaveral. I've been in that area a handful of times, but unfortunately never when they were lighting those big firecrackers. Maybe on my next trip, I'll plan it better. Someplace I have a link to a video of a Falcon Heavy launch that was recorded in Ambisonic sound or some such surround system, which is impressive, but still a far cry from the real thing. I'll see if I can find the link....

Put on your best headphones, and keep your hand on the volume control! It's pretty awesome, actually. Especially the re-entry sonic boom shock-waves, recorded very clearly. (The narrator knows his stuff, too, and certainly doesn't lack enthusiasm!)

My late mother-in-law lived in Putney, South London on the Heathrow approach flight path of Concorde. Very loud indeed, but usually at the same time of day (early evening), so it was not jarring, but more like, "Oh, Concorde." The stall and accompanying doppler effect were always neat to hear.

When Paul McCartney played in Philadelphia in 1996 (it was an amazing concert), he had to get permission from the city for the sonic booms in Live and Let Die. It wasn't so much the initial sound, but the reverberations in the stadium that made it seem like the loudest thing ever.

Yeah, I like that guy, Destin(?). He has some pretty good videos, and manages to get himself invited to some pretty awesome places. Worth watching.

Users browsing this forum: No registered users and 3 guests