Myth: "Egg cartons can soundproof a studio, and make the acoustics sound good".

Myth: "Egg cartons can soundproof a studio, and make the acoustics sound good".

This one just refuses to die!

Everyone seems to just "know" that all studios must have egg cartons on the walls and ceiling to make the sound good. Or to "stop sound getting out"....

Guess what? That's a myth! And a very persistent one that refuses to die...

The concept seems to be that the shape of the egg cartons will "do something" to the sound: maybe "break up the waves", or "scatter the waves" or "absorb the waves"... or something like that! Apparently, people look at photos of some low-end studios and see wavy things on the wall that look like egg cartons, so they figure that it must be a good thing...

Reality is different. Once again, the highly-respected Riverbank Acoustic Labs did some testing on egg crates, to find out what they actually do: Here's the result: 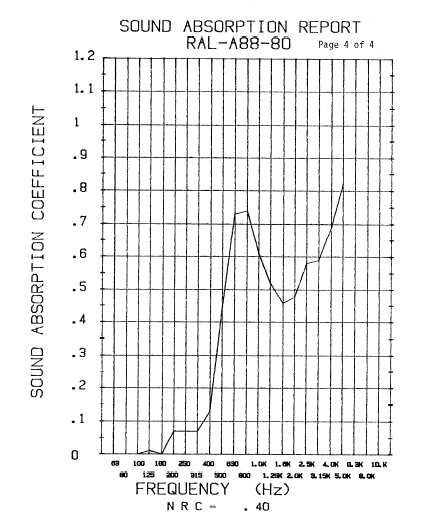 In other words, they do nothing! Zip. Nada. Zilch. There's a slight absorption peak around 800 Hz, then a bit more absorption in the high end, but apart from that there is nothing at all! Especially in the low end, which is where most small rooms have serious issues that need serious treatment. But egg cartons have absolutely no effect at all below about 400 Hz, and nothing useful below about 600 Hz.

Here's another graph that compares egg cartons to 2" of acoustic foam (and that foam is already pretty terrible, and not much use in studios!): 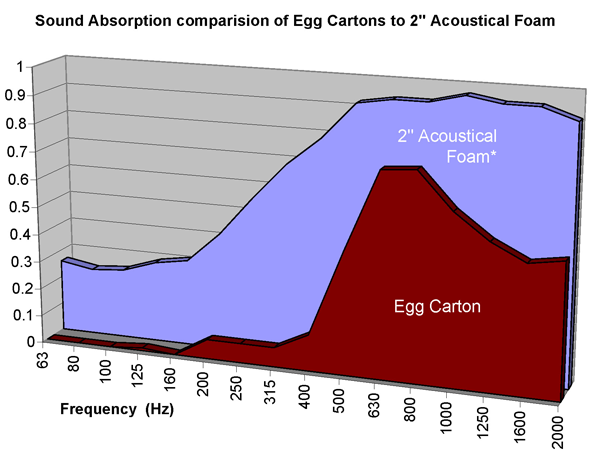 It's pretty obvious: That chart compares a rather poor absorber (2" of acoustic foam), with egg cartons, and even that lousy foam is much, much better!

I once taught a "Basic Sound And Acoustics" seminar at a church that was being renovated, and they proudly showed me a huge stack of egg cartons they had accumulated, to "soundproof the main hall". I showed them these same graphs, and explained to them that, sadly, the egg crates were no use. I did some practical demonstrations for them to, putting several of their egg cartons in front of and around a loudspeaker, so they could hear the difference.. or rather, the lack of any discernible difference, even with a whole bunch of the things. They were a little disappointment that they had been so badly mislead.

So forget egg cartons. No use at all (except for transporting eggs...)


Below is the actual Riverbank test report so you can see all the details of how they did that test.... and almost read between the lines, at how loud they were laughing when they did the tests!