I wouldn't worry about your plasterboard, yours is the standard stuff, it will be fine. This is extra dense, and in fact not cost effective - you'd get more mass for your money with two standard 12.5 mm boards. A single layer of heavier density just happened to be particularly useful for this particular application so worth paying a bit more for.

There has to be either an angle on the plasterboard, or an angle on the strip of OSB that will go across the top. The OSB will surround the edge of the bass trap completely - there will also be a strip along the bottom; 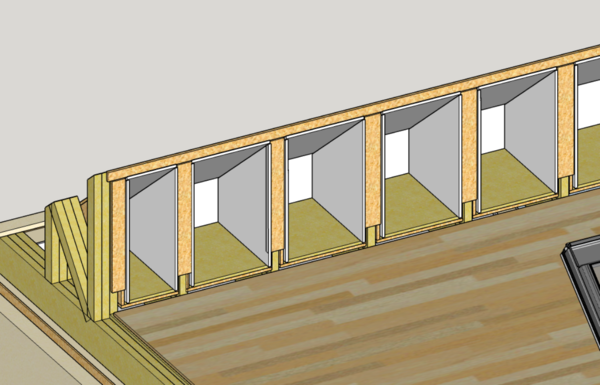 The trap will be fixed to this OSB perimeter with some very deep screws, and probably some washers near the top. Similar to how kitchen cabinets can be attached to OSB behind a layer of plasterboard. Angling the plasterboard along the top edge & keeping the OSB rectangular profiled gives a bit more OSB surface for the screws to hold in to.

This way it will be decoupled from the floor joists in the same way as the old plasterboard wall was.

It probably looks precarious but I reckon it will be ok. Fun facts;

- Standard kitchen cabinets are rated to a gross weight of about 225 kg in the UK.
- These will weight about 50 kg.
- These are deeper than kitchen cabinets, but deeper part is also narrower.
- In practice the cantilever force isn't actually that bad. You can easily hold the trap in place with one hand.

All that being said, I'll put a couple of planks across the joists under (but not touching) these traps, to prevent them falling through the ceiling below in case somebody one day overloads them to a crazy extent.

Such craftsmanship, made all the more demanding with all those angles. I am impressed!

I bought 15mm Rigips (a sub-brand of Knauf) fire-rated plasterboard and I weighed it: 13kg/m2. The fire-rated and acoustic boards are both denser than standard. Your acoustic boards win the heavyweight competition. Gareth, if your boards are the same size as mine, 2m x 1.2m, then yours are 13.75kg/m2 which is par for the course.

Jennifer, your logic about corner modes and bass build up makes sense but I cannot recall having read anything that would support this theory. What do you have to lose? Some time and money? What do you have to gain? Better isolation, possibly. I would be tempted to do it because, as you say, you will not be able to do it later.

That's reassuring thank you Starlight. Indeed, the extra time and cost for the Green Glue is peanuts in the larger context of this project.

Progress on the builtin bass traps.

These two are almost ready for a test fit. The inner layer protrudes "bank vault door" style to allow the proper stepped method of joining and sealing. An undercoat of paint has been applied to one of them. It's going to need a couple. In some ways a waste of time as they'll not be visible once the insulation is in place, but if the studio ever stops being a studio they might become cupboards, so might as well do it correctly while access is easy. 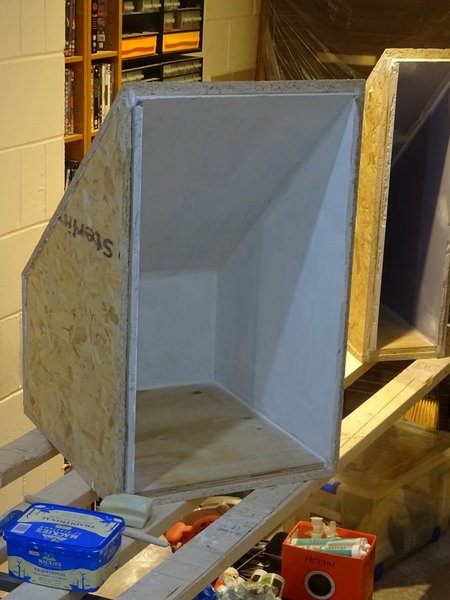 They look like they would make excellent bass reflex cabinets!

Yes! And indeed, from the paper on waveguides / acoustic hangers I posted earlier, I wonder if they will provide a "reverse horn" effect since the sound will be coming into them and getting squashed into a smaller space, rather than out in to a larger space.

I honestly have no idea if there is anything to this at all, but will certainly perform various measurements with different things inside those too see.

Nice work! And so begins what I have discovers as the worst bit about studio building - the tedium of repeated actions! Looking at your sketch up drawing you’ve got quite a few of these to make...

A quick question and maybe me being thick. If they’re mounted/fixed only to the wall, rather than to the joists below as well, what will you do at the intersection between the bottom of these and the floor in the room to preserve isolation?

Six in total to make. No worries, I've had a production line going the last few weeks, they are all at least 85% of the way to completion.

The trap / floor intersection is a bit trickier than the walls. There are mains cables running along on a plank across the joists under the traps. The plank doesn't go all the way across, so I will add one and clip the cables in place so it does; 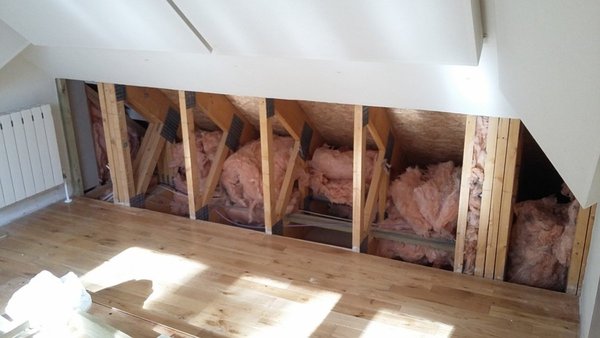 I can't move these cables - that would require an electrician - so the floor of the traps will have to be a couple of inches above the floor of the room to allow good clearance above those cables.

I'd also like to put the skirting board back on that wall to preserve the look of the room, so there will be a small lip along the floor of the traps. None of this causes me any concern, but does make the join a little bit trickier.

I can't easily do the "bank vault" step at this point, so stepped the inner layer back a bit. The plan is to seal and screw the outer layer to the OSB wall, then fill the inner layer / OSB wall gap with sealant once it has dried. Hopefully it will do the trick; if not, I could attach another bit of wood on the trap floor along the join to provide a proper stepped seal. Here's a very quick mockup 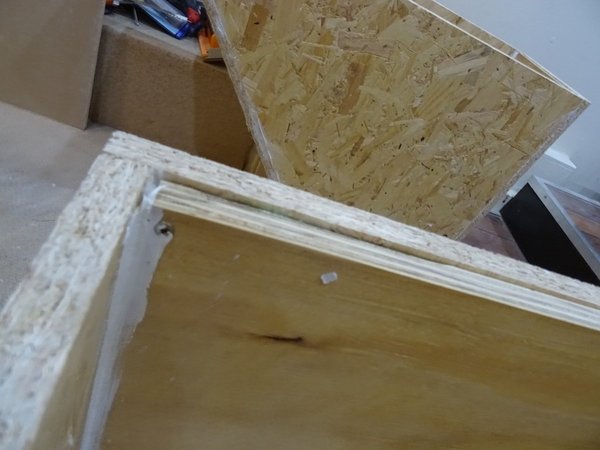 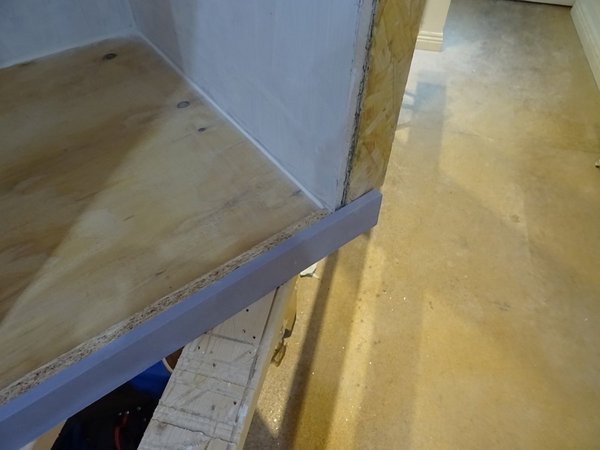 Some cable tidying and securing. I attached a wooden "pad" near the cables to stop them getting crushed if the trap was somehow to fall off the wall. 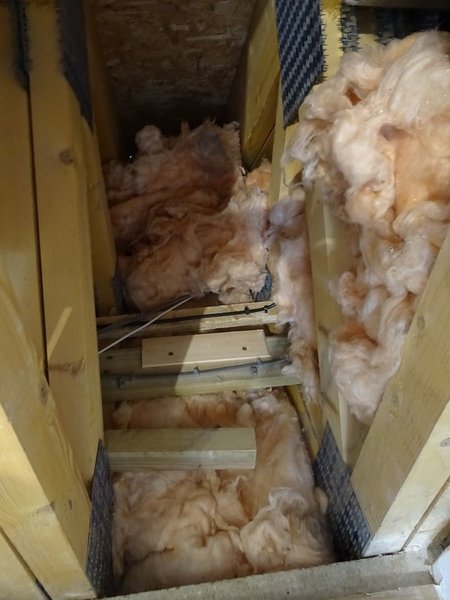 Test fit of the narrowest trap. Mercifully, it worked. 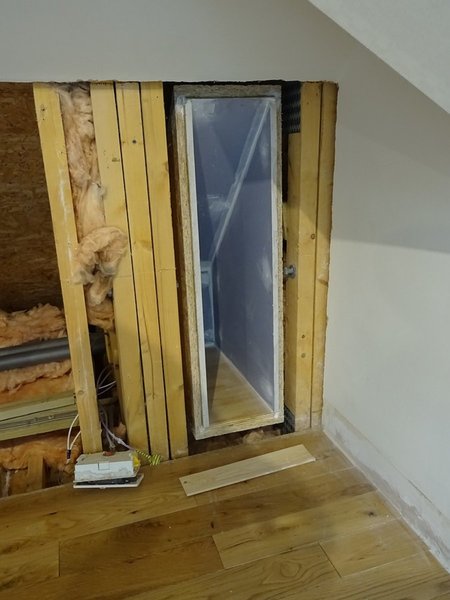 Six isn’t too bad is it, and your plan for the floor intersection makes sense. I was just concerned you’d be loosing isolation at that point which would be a shame given the efforts you’ve gone to on these boxes.

These boards are heavy - the specified density is 12.6 kg/m2 - but the mass marked on the board is 44 kg, which would give 15.2 kg/m2. I'll try to remember to put a board on the scales to confirm either way.

Put a sheet on the bathroom scales today, it weighed 40.5 kg, so just over 14 kg/m2. I'd say the scales are reasonably accurate. So the plasterboard density is less than marked, but more than the specification sheet.

If we told friends that we spend time comparing our plasterboard densities surely they would claim that we are all crazy.

Keep up the good work!

That's very nice! I bet they will be effective!!

Starlight wrote:Source of the post If we told friends that we spend time comparing our plasterboard densities surely they would claim that we are all crazy.

We are in good company!

.dio. wrote:Source of the post That's very nice! I bet they will be effective!!

Let us hope so! And if not, at least they'll look good

Users browsing this forum: No registered users and 14 guests