So I thought some more about it & I think its fine?

I realized that the graph I linked above compares double-leaf & triple-leaf systems that use the same overall thickness & mass.

They're essentially doing the tests with the same number of drywall sheets & wall space. like so:

(Would recommend reading Stuart's thread on MSM (double-leaf) systems in walls, if you haven't already. It explains all of this v well: https://www.digistar.cl/Forum/viewtopic.php?t=413)

MY situation differs in that I'm not sacrificing any amount of spring gap (my spring being rubber instead of air) for the sake of making it triple-leaf. The gap inside the speaker box is unchanged.
The wall equivalent would be keeping the original, large air gap & adding another air gap+drywall combo on one side. The resonance frequency would stay the same because the original air-gap hasn't been changed and the isolation above the resonance frequency would be improved by the new 'layer' (of course, you might not want to do this as you're spending more money on materials & sacrificing room space for a thicker wall).
THAT SAID, in a wall situation it would still be better to use that space for one large air-gap, as you can drive the resonance frequency even lower & get much better isolation of the bass frequencies.

But in my case I can't make my Sorbothane any thicker than 1", so my best option IS to go triple-leaf.

One thing that DOES carry over to my situation is that by separating the housing box from the overall soffit structure I'm effectively 'splitting the mass', which can result in a higher resonance frequency. However the weight of the housing box pales in comparison to the weight of the entire soffit structure so really I'd only be splitting the mass a little bit. Theoretically the benefits should massively outweigh this very slight pitfall. 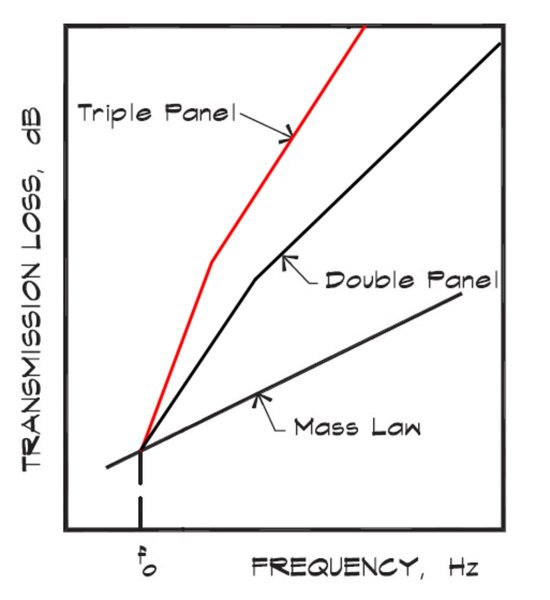 I feel more often than not with these things that simple is better. I wonder by having so many layers/leaves each floated using Sorbothane is making things complicated in a way that could be detrimental. Maybe start with a design like mine and see how you get on? If that isn’t as good as hoped, taking off the baffle to add additional Sorbothane damping/isolation won’t be that difficult? Better to start with solid framing and see how you get on, I wonder?

I won't lie I was right on the cusp of abandoning the triple-leaf system but then I realized I still needed 2 6x6 sheets (Gelmec only sell 1" sheets in 6x6 and 12x12 and i need around one and a quarter sheets of 6x6 for the inside of the housing boxes). I could've cancelled the washers but I figured I may as well try & make sense of the triple-leaf pitfalls and I could always sell the washers if I decide too late.
Feeling a lot more confident about the triple-leaf system now

I should imagine there will be other elements of the room/design that have a greater impact on the sound than this?

You are almost certainly correct about that lol

So I finally got around to doing my first REW test!

First I sealed all the gaps & holes with Sikaflex PRO 11-FC (the sealant that Stuart recommends). I got a really good deal on a box of sausage refills (£35 for 20 300ml sausages!!!) but they only came in brown so now my soffit structure looks like a big cake 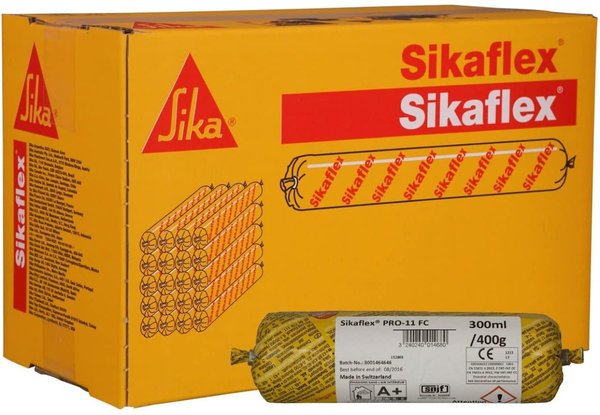 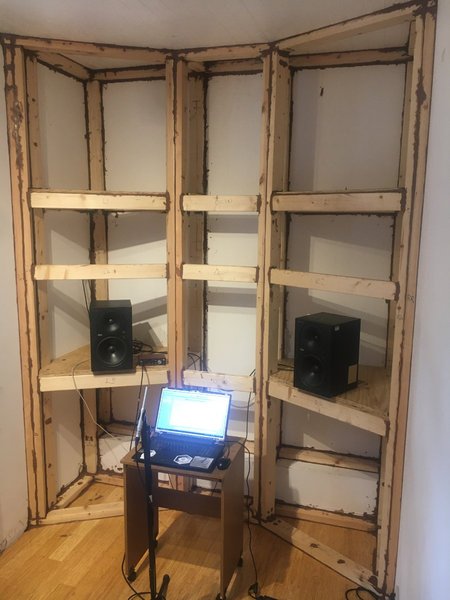 (Tip for fellow idiots: ALWAYS wear disposable gloves when handling Sikaflex. It gets everywhere and is VERY hard to get off your skin. Also, wear crappy clothes cuz if you get any Sika on that, it is never, ever coming off, which isn't ideal if your sealant is poo coloured)

For the mic position, instead of hanging a plumb bob all the way to the floor, I used it to align the tip of the microphone with the stem of the stand. This way the mic is always at the same angle (around 70°) 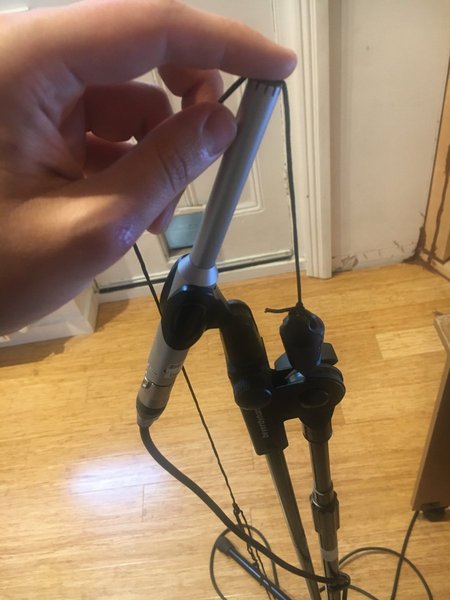 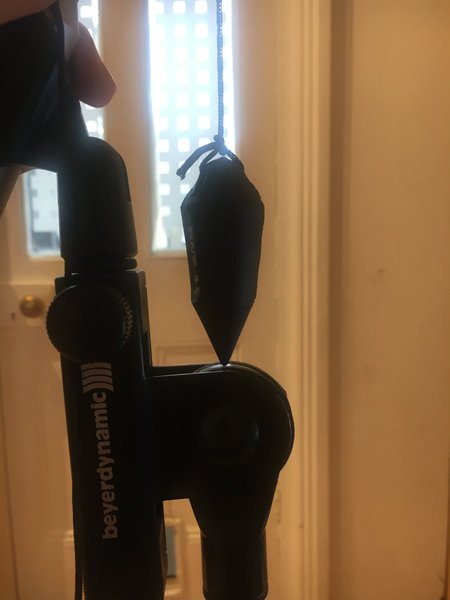 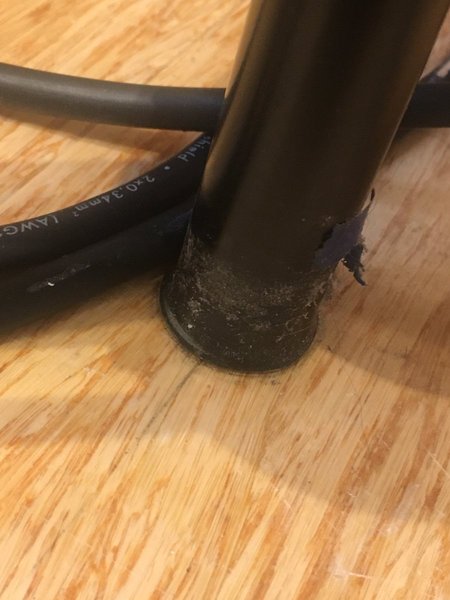 For the height, I put the stand next to a speaker and adjusted the height until the tip was aligned with the acoustic axis of the speaker. I then wrapped the stem in thick tape so the height was locked 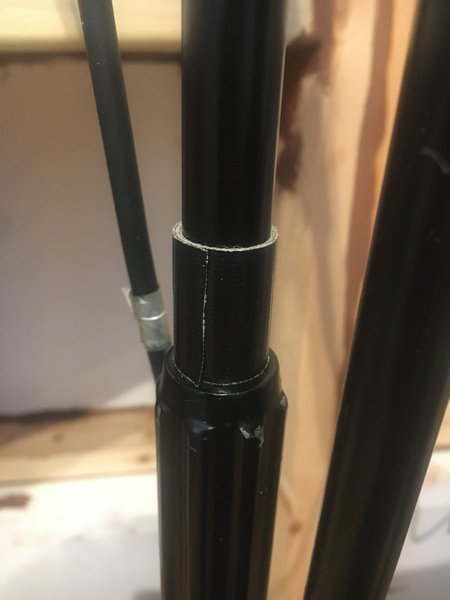 Here are the results
SPL (both speakers playing together):

This last one is for determining if my speakers are sufficiently balanced & if my mix position is optimal, but I feel like I've done something wrong...
For some reason my difference graph shows my L speaker as getting gradually louder as you go higher in frequency? From 1KHz upwards it fluctuates around the 5dB line, indicating that the L speaker is 5dB louder for most of that freq range, but look at the 'SPL (each speaker)' graph - that's clearly not the case. In fact, from around 2KHz upwards, the R speaker is louder.

I did the right thing, didn't I? I went to All SPL>Controls>Trace Arithmetic, selected L and R as A & B respectively, then generated an 'A / B' graph

I figured IF the graph is correct, then doing B / A would give me an exact mirror flip around the 0dB line. Here's what I got:

The curves starts off perfectly inverted around the 0dB line, until around 200Hz where the 'reflection line' starts to rise, with both graphs fluctuating around it?
Is this a calibration problem or something? Maybe an issue with the smoothing? If you look closely you can see that (B/A) isn't even an exact inverse of (A/B) at certain points above 200Hz, so I think the trace arithmetic function might be broken

I tried generating A / B difference graphs using other people's .mdat files to see if they match the ones posted on the thread & I get the same weird result - they're identical to begin till around 200Hz, then my one slowly starts to rise. Here's one from a 2017 JS thread: 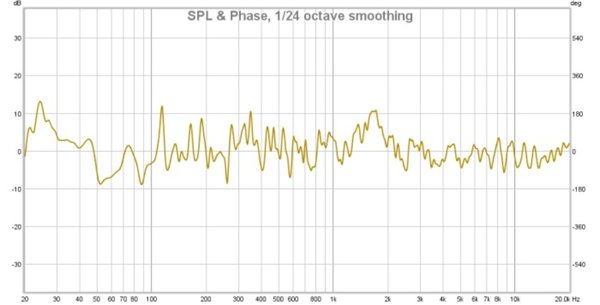 And here's my re-creation:

Seems identical at first, but look at mine closely. It's rising! From 1KHz - 5KHz it's barely touching the 0dB line!

My mixing position needs to be optimal before I move onto the next step. I may well have to take several REW tests with the mic at slightly different positions to find the best one, but I want to make sure I'm generating the LR Difference graph correctly. Can anyone help me out with this?

So I did an A*B on my LR Difference graph and its inverse and it pretty much confirmed my suspicions:

If REW were working properly (A/B) would cancel out (B/A) and this resulting line would be completely flat at 0dB, but from around 200Hz upwards it starts spiking.

Here it is with 1/6 smoothing:

Not really a gradual rise like I initially suspected, but still

So I sought help from John Mulcahy (the author of REW) and he told me the apparent slow rise is an artifact of the way smoothing works on difference curves that include room reflections.

Basically it is possible to generate a usable difference graph, but only for the direct sound from the speakers. You do this by reducing the window. Here it is with a 1ms window: 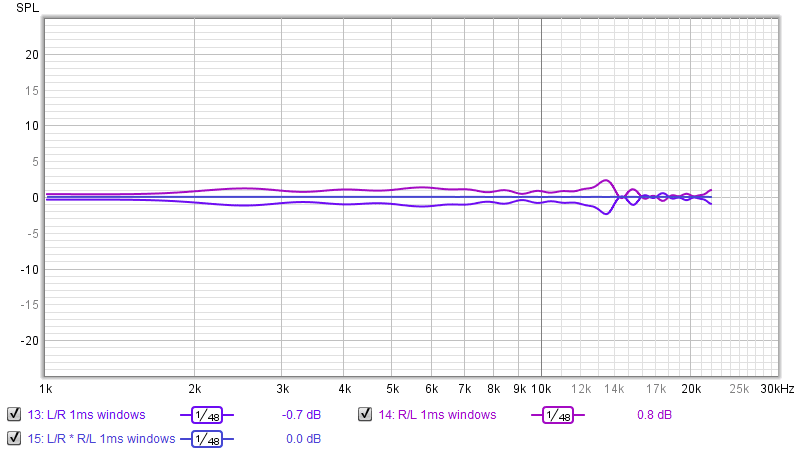 As you can see the product of the curve & its inverse has resulted in a completely flat line at 0dB, like we wanted.

Problem with this is the traces cut off at 1KHz since the window width sets a lower bound on the frequency response.
To generate a difference graph for the entire frequency range you need to select the frequency dependent window window option (the default 15 cycle setting is probably fine). That has the effect of a variable window which gets narrower as frequency increases.
Here is how that looks, with the default 500 ms RH window: 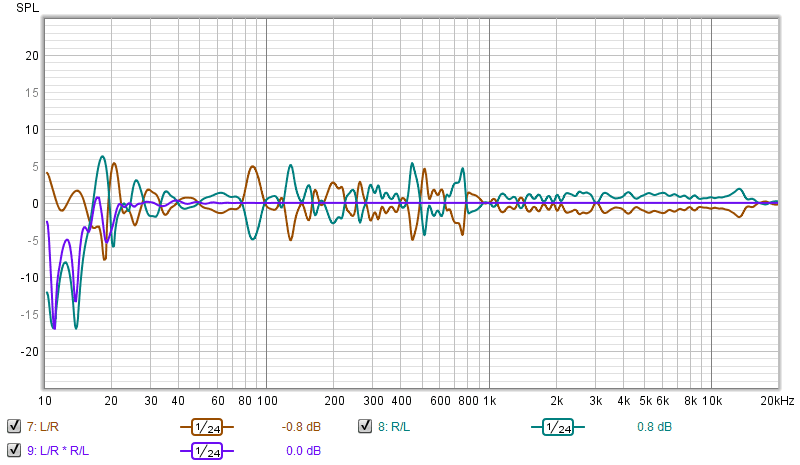 THIS is what I wanted, pretty much
(FYI the (A/B)*(B/A) isn't flat for 80Hz and below because noise is interfering)

So basically I can still use difference curves for figuring out the mix position in relation to the speakers. The difference graph only becomes problematic once you start including room reflections, so as of yet I'm unaware of a good way to ensure the speakers are balanced in relation to the room beyond making sure all your measurements are correct and just eyeballing the acoustic responses.

That is interesting! Something seems strange there. I'll send a message to John Mulcahy (the developer) and see if he can shed some light on this. Maybe it is phase-related, or simply due to the two measurements not being taken exactly identically... or gremlins in the software!

Soundman2020 wrote:Source of the post That is interesting! Something seems strange there. I'll send a message to John Mulcahy (the developer) and see if he can shed some light on this. Maybe it is phase-related, or simply due to the two measurements not being taken exactly identically... or gremlins in the software!

Read my last post Stuart (post #50), I already contacted John and he explained the issue. I can still use difference graphs for direct sound from the speakers but it becomes problematic when you start to include room reflections (it is minimum phase related).

there are the two domains - frequency and time. symmetry is both physical boundary and the balance of absorption (generally some way of converting the acoustic energy into heat) and reflection control (scattering, diffusion, reflection). so once you have adjusted the design (or existing room) to balance the frequency response, you need to control the timing of the responses from parts of the room. anechoic is generally not good (but where you like to see speaker tests and their frequency response), reflective is also bad because... (too many reasons why). as noted by the window settings to include or exclude reflections, you learned the impact of them from a frequency perspective, but your hearing integration of the timing signals is what will be equally if not more important. if the sound arrives late enough to cause your brain to recognize them as separate sounds, you won't have a strong comb filtering effect in your brain because it can reject those, opposite, if the sounds are perceived as a single source, then how does your brain then differentiate (and thus not integrates) the comb filtering and timing impacts which skews the interpretation of the sound... so controlling the "windows" inside the room become the challenge to a well balanced room, and thusly why people have tried all kinds of room models to address it: controlled response, LEDE, RFZ, etc etc in an effort to find the magic solution.
all to allow someone to make decisions on a mix which ultimately will be listened to as MP3 on ear buds

Users browsing this forum: No registered users and 14 guests