Speaking for the rest of the rabble, it wouldn't be a project without the multiple daily trips to the home center.

endorka wrote:This one here? Should've bought something like this years ago instead of buying all these individual packs over time!

That's the one! I think it's great value although like others said there is one size I bought separately when making soffit framing a few years back.

I have been known to go to Screwfix several days a week...

I was standing in the queue at Screwfix with a dozen tubes of caulk. Tradesman next to me said "I'd sack the joiner if I were you pal!"

I was standing in the queue at Screwfix with a dozen tubes of caulk.

This sounds like a great beginning for a monologue.

A lengthy one at that!

Knee wall the right hand side, the inlet silencer will go in the eaves behind this; 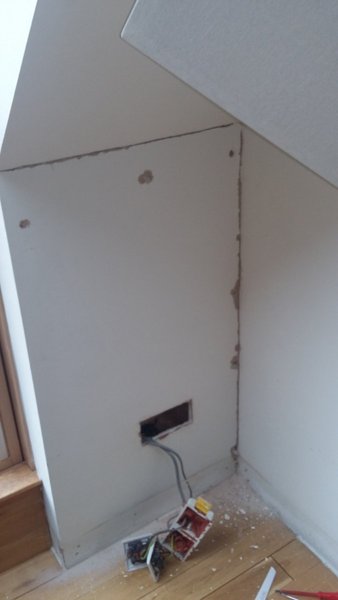 Fortunately there is enough space for the planned silencer. No pipes or others intrusions into the space, and the building and electrical work is exemplary in its neatness; 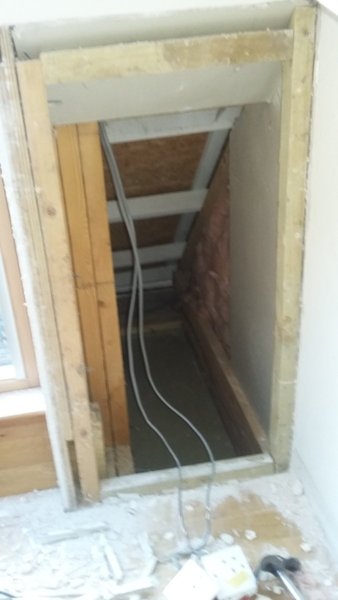 The stud frame the plasterboard was attached to is what the silencer will be mounted on. The left side of the frame is well anchored to other structural elements, the right side not so much. So I plan to add a couple of noggins to stabilise and reinforce it. Planned noggins in yellow; 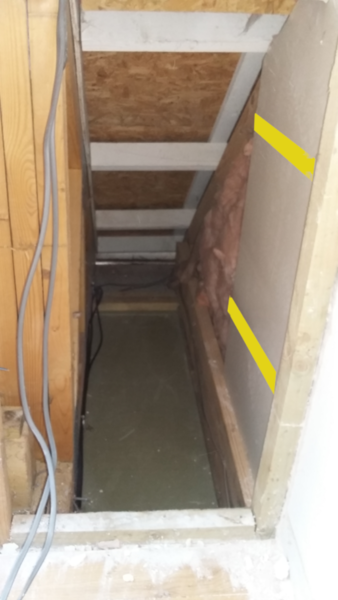 These terrible annotations to the house plans show what is going on. The knee walls (blue) actually come a little bit further into the room than on the plans, and have their own stud frame. The right wall studs don't line up with this - the studs don't form a corner, only the plasterboard - so the noggins (yellow) will connect stud to stud. The right wall stud being further into the eaves is the reason the right wall plasterboard goes into the eaves, all the way up to the stud. 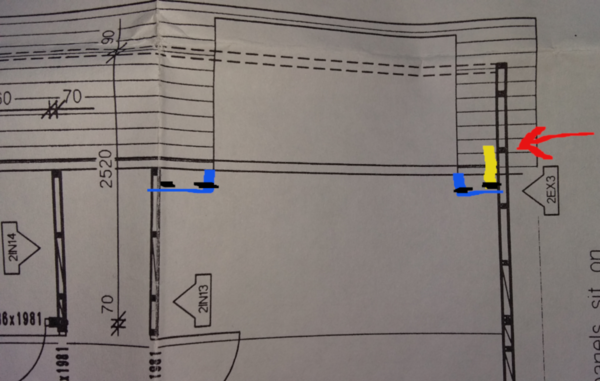 the building and electrical work is exemplary in its neatness

Sorry to state the obvious, but best to measure out and test how square the hole is before you make the silencers, and then try and slot them in only to discover that they won't fit at the back because the hole is skew!

A timely reminder, thank you. I suspect we've all been stung by the off square aspect at some point

Yes indeed!!! Currently doing the conversion of our garage for my wife's art studio. The whole thing is out of square. The ceiling was particularly aggravating.

My first real experience of it was many years ago after specifying a row of cabinets & appliances for a kitchen refit in our old place. All items delivered, work started, the fitter told me they wouldn't fit because of an off square corner of the kitchen. Nightmare

It was only a matter of millimetres, and fortunately we were able to resolve it by sawing a little bit off the width of a cabinet. The doors were featureless so the fitter was able to saw a bit off that too. Lucky escape. Never again!

Time to start piling up the stocks.

Here are patterns for 2 silencers and 6 builtin bass traps at the rear of the room, overlaid on sheet material of the relevant size. Most are 18mm OSB-3. White is 15mm plasterboard, the yellow is 18mm plywood. Non rectangular cuts have an equivalent mirrored cut as these materials are "sided". The plywood will go on the floor of the bass traps to roughly match the wood floor of the studio. Of course this won't be visible once filled with absorption, but might as well do the job right. If the room ever stops being a studio and turns into a normal room these will make nice storage. 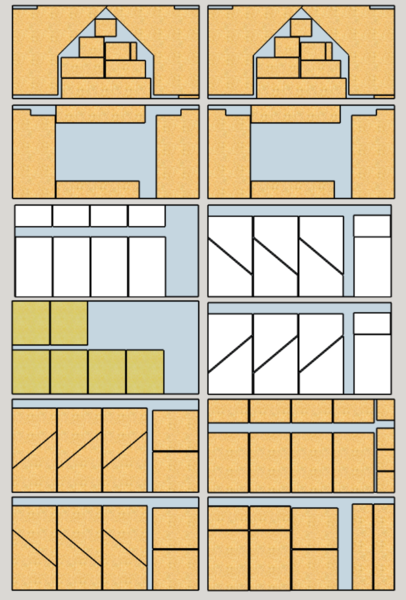 I'll be ordering an additional 4 plasterboard panels. 1 for the knee walls at the front of the room and 3 to beef up the wall between room 2 and the landing.

I already have enough green glue for all this, and will be making a circular saw guide based on Starlight's recipe.

If only you could 3D-print these...

endorka wrote:Source of the postI ... will be making a circular saw guide based on Starlight's recipe.

The principle works; my first attempt has a flaw: I have discovered that I chose too small a piece of aluminium track. It bows by about 1.5mm. Mine is 8 x 10mm track, the smallest. Next time I would buy a larger size and check the piece I buy is dead straight.

An alternative would be to use the edge of a plywood board as that should be straight.

The 4mm plywood base is fine.

Thanks for the update Starlight.

I was going to get a 15 x 15 mm rail, but after what you've said I'll use some spare 18mm plywood from the above cut. There will be enough along the manufacturer's straight edge to make a long enough guide. Cheers!

Users browsing this forum: No registered users and 6 guests