Slovakia has had a massive resurgence of Covid-19 which, sensibly, resulted in a 90-day lockdown

You've clearly put the time to good use!!! Can't wait to see the hex ceiling... 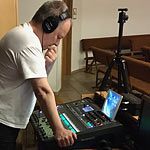 SoWhat wrote:Source of the postYou've clearly put the time to good use!

My work rate has slowed up which I needed.

SoWhat wrote:Source of the postCan't wait to see the hex ceiling.

Has your build has started to regain any momentum, Paul, after it sort of grinding to a halt?

Has your build has started to regain any momentum, Paul, after it sort of grinding to a halt?

I think I might have mentioned that we are focusing on my wife's art studio first (garage conversion), as she needs a bigger space not only for her own work, but also for the significant amount of online teaching she is doing. The makeshift area she's using now is quite cozy indeed. We should have that occupy-able by January.

Meantime, I'm getting all of the permit-related stuff in order (most of it has to do with water run-off mitigation). I've never looked forward to spring so much...

While I wait, I'll live vicariously through the rest of you.

Joseph, our builder, working in the corridor, putting up fire-rated plasterboard. This is the first coat of filler to hide the joins between the boards and the screws holding it all up. After I have sanded it smooth Joseph will put up a second coat which I can sand, prime and paint. Round the corner Joseph's work was most impressive, working out what shape and size pieces of plasterboard needed to be slotted into place above the ventilator and pipes and around the support rods holding the ventilator and ducts up as well as around the silencer boxes and then get in there with his screwdriver to screw them to the aluminium frame and then with filler without leaving a mess. Phew! This photo doesn't do Joseph or his work justice but it reminds me how grateful I am to have him work for us. Inside the studio the basic framework for the drop ceiling is up. I have yet to adjust the height of each of the support rods. The centrepiece (which is not in the centre) around which the whole drop ceiling is located is the place where the incoming air duct will drop fresh air over the AC and in front of it. The ventilator should be on whenever someone is in the studio but the AC will only on on when needed, so fresh air needs a way in to the studio in front of the AC for when it is off but also into the AC's inlet for when it is on, hence the odd looking aperature. I don't have a picture of my ceiling plan to hand to explain all that will being going on up there. I will sort something out for you soon.

PS. As I am writing this I can hear a brass band outside playing Auld Lang Syne and other songs. Christmas is approaching.

That’s looking awesome and nearly like a room! Nice to see it coming along.

Hello again. I wanted to at least get something of an update in before Christmas, so here is where things are at.

The drop-ceiling frame has been painted, installed and levelled.

We (my wife and I) have been making our own ceiling tiles which has been and still is time-consuming. If anyone is interested I can show and explain what we used and how we made them. Almost all the frames have been glued and are lying in place in the drop-ceiling as a sort of dry test run. One fell and broke into its individual parts so I decided to also screw each frame.

I have started putting up the edge tiles as they are the ones that are not full size, and starting to put insulation on them. Here are 4 photos showing the two completed wall edges: All the space between the plasterboard ceiling and the drop ceiling will be filled with insulation where there is not already a duct, silencer box or something else.

One more thing, I mentioned that I would show you what my plan is for the stuff above my head. Immediately beneath the plasterboard ceiling are the silencer boxes (bottom right), ducts (grey) and the yet to be made plenum (centre top, sort of a dirty pink colour). There will also be the wiring for the lighting. Then there is the blue grid which is the drop ceiling. Below that, the cloud (grey) above the listening position will have 4 Philips Hue lights (orange in the picture but white in real life) plus two hexagonal space couplers beneath the cloud. Just in front (above in the image) is the yellow AC which gets its fresh air feed from the plenum.

As the room will mostly be used for learning and rehearsals, the outer 6 of the 7 hexagons together will also have Philips Hue lights.

The green stripe on the inside edge of the grey acoustic treatment around all the walls will be Philips Hue colour LED strips.

The challenge is for me to be able to see all this in 3D, make sure that nothing interferes with anything else (eg. hence the interesting curvy paths the ducts take) and know what needs to be done next before blocking off access to something that I won't need until later (eg. cabling for the lighting).

That's it, so far. Happy Christmas everyone!

AWESOME! Thanks for the update!

That looks fantastic. I’ve been debating Philips hue or similar - need to look into the costs!

My last photo of 2020 shows what a mess I have made. The finished drop ceiling tiles now run right round the edge. Cables for the lighting are partly up and I will need to prepare mounts for all the other stuff that will hang from the ceiling before putting up the rest of the tiles. Edited to add: that is not a doorway, it is just a door and frame leaning up against the wall.

Thanks for the update and pix!

that is not a doorway

Happy New Year and all the best,

This week's main job was to make a plenum so that the fresh air coming out of the duct can slow down and be directed to the AC's air inlet. I started with a cup of coffee and gluing a frame using wood from my old traps that I took apart. Here is the finished frame. Trying the frame in place to check that everything is correct. Then I got interrupted as Miriam, my wife, wanted me to record her singing and playing 3 songs. Now that we have insulation up around all the wall-ceiling corners and a massive pile of insulation in the room, the recording worked out well, with no boxy room sound. We recorded the digital piano upstairs in our flat, plugged direct into my old Zoom H2 recorder. Then we went into the studio where Miriam listened to the piano from the iPad and I recorded her vocals on the Zoom H2. So basic but the room made it so easy, even with no doors! Fortunately a national holiday and coronavirus lockdown meant it was unusually quiet outside. After that the plenum wasn't needed as a music and microphone stand so I could get on with adding OSB sides and bottom. Following the silencer box design I used the ceiling as the top. Mounted in position, screwed and caulked to the ceiling and taped to the duct. You can see the hole I left in the drop ceiling tile which matched the hole in the plenum, allowing fresh air to drop onto the AC's air inlet as well as falling in front of the AC when it is switched off. That was the week that was.

Thanks for the update and pictures. Nice to be able to make some music in the space even before it's finished.

Following your example in the photo, I might use chicken wire as a diffuser myself.

Hi Starlight,
congratulations on the progress in your work first!!

One question, is your plenum made from a single layer of OSB? If so ... how thick?
I do not understand the function well but if it is a real silencer .... I think it is under dimensioned as sound insulation, otherwise it could be (considering the generous dimensions) as a large resonant cavity but .... forgive me maybe I don't have got it right.

Hi Lucio and thank you for the questions. The plenum is a place where my studio designer's plan didn't make sense to me so I asked about it and he never replied. I want to continue with the build so I decided to make the best decision I could. That means my plenum is no more than a box that takes a 20cm round duct as its input and that specific hole (approx. 55 x 28cm) as its output. As the outlet (1540cm2) is much bigger than the inlet (314cm2) it does mean that the air speed slows down, which is good, but there are no baffles, no attempt at making it a silencer.

You guessed correctly, it is a single layer of 15mm OSB, lined with duct liner simply to act as a brake against the air possibly buffeting around inside the box, not that was any reason why it should, just that it would be impossible to line the box once it is closed and in place. It was purely a guess on my part.

I hope that satisfies your curiosity.

You clarified very well and personally I think your choice is a good one.
I don't know what acoustic insulation you will add to your final ceiling, the one that will practically cover the lower part of the plenum, I am concerned about the possible resonance of the box but I think you have already considered this.

Users browsing this forum: No registered users and 8 guests