I would like to ask your opinion and hear any thoughts about a small budget home cinema I am going to incorporate into my future house. I shall be starting the project with an architect within few months (and he or she probably will not specialize in acoustics, but in residential housing), so it is a good time to start preparing. I have done some research previosuly, and that is what I came up with.

The renders are very amateur - bear that in mind, I am no designer, just wanted to give some visual to my thoughts. To clarify the instruments up front - I will need a space to molest my guitars and to shriek freely without disturbing other cohabitants and hence a soundproof room.

1) dimensions - using the web calculators I explored many recommended proportions in conjuntction with what may be practically available and settled for 600 x 500 x 390 cm, which would give quite some Bonello modes and most powerful standing waves will be axial and mostly in predictable places such as walls and corners: https://amcoustics.com/tools/amroc?l=60 ... 90&r60=0.6

2) soundproofing - in my area bricks and concrete blocks are standard building materials (not studs, osbs and drywall); I am planning to use silicate blocks which are the heaviest (ca. 2000 kg/m3); my idea is to use two walls (a room in a room construction) of 18 cm thick blocks (which provide 45-55 dBs of sound isolation) and a 30cm wide airspace between them filled with mineral wool; also the double doors are intended to be borrowed from conference halls that isolate ca. 45 dB and combined in tandem (one double door in interior wall and corresponding double door in exterior wall 30cm apart). Also a double conrete ceiling with airspace and floated (yes, I mean really floated) floor. I even consider separate foundations for the two walls to keep them decoupled by the ground and thus reduce side transmission, but the architect must speak first to that idea.

3) acoustic treatment
a) I intend to initially hang a few quadratic diffusers on the ceiling over the couches (listening point), I have found locally-made N19 QRD Skyline type diffusers constructed with XPS foam spanning 57 x 114 x 16 cm and weighing only 4 kg each; the calculated diffusion range is (543 Hz) / 1087 Hz - 5733 Hz. Since they cost only $150 each I could install a few of them e.g. 6, some of them inverted.
b) Absorption - to reduce cost and maximize efficiency I am planning to simply cover the unfinished whole side and back walls from floor to ceiling (also the door panels) with with 15cm thick stone wool (e.g. rockton) and cover it with a dark cloth, and to increase functionality and sturdiness also cover the lower part of circa 180cm from the floor with a siding of openwork panels made of MDF (represented in the renders, but I intend even more holes in those panels, so that they would additionally do some scattering of higher freq); probably also some bass traps in the corners but that actually would be determined afterwards - as needed; the front wall would serve as screen and therefore would remain untreated to reduce cost (not only treatment but also the screen - this may of course be upgraded at some point in the future)

The intended sound system is in 11.2 Dolby Atmos standard, but honestly something quite budget, like $2000-2500 for the amplituner and all the speakers. Paired with a $1000 budget 4k projector at first.

What do you make of it?

Do you think I should already initially plan to further treat the ceiling (if so - more diffusion or rather absorption in the first main [i.e. from main channel, multi-speaker setup makes it rather complicated] reflection point)? What do you think would work best as floor finish - LVTs or regular old ceramic tiles? Any other suggestions or ideas? 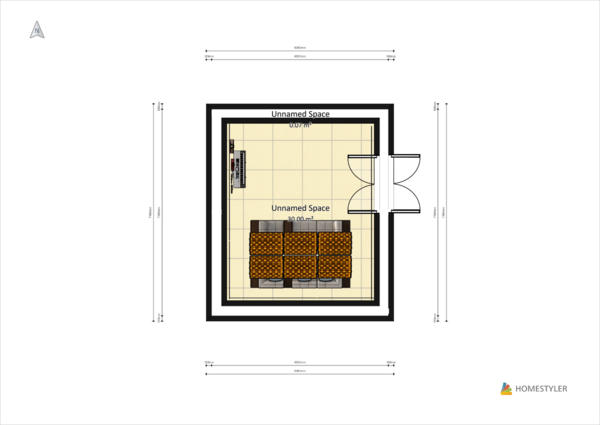 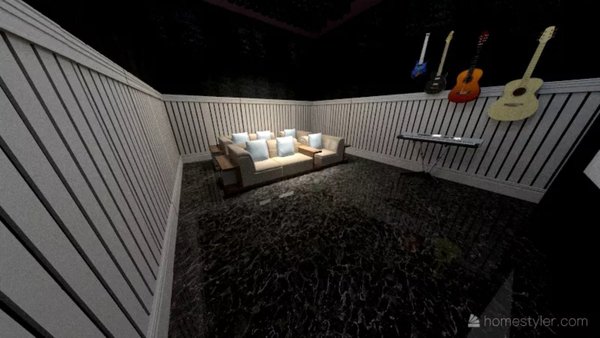 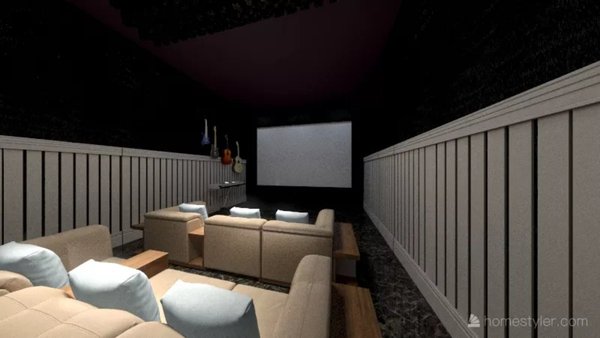 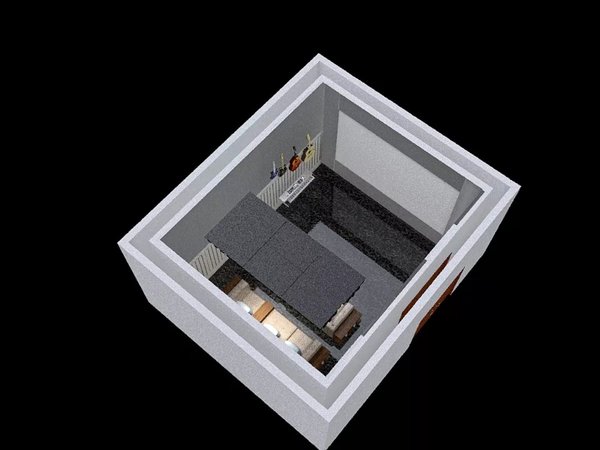 maybe consider inside-out walls for the interior room - this way your walls and ceiling are already absorptive all around. then add diffusers and slat panels as needed to reinforce high frequency response as needed. to prevent people indenting the walls, use a heavy wire mesh under the cloth treatment, and/or some horizontal strips (not too many) ala "chair rails" you might find in a dining room.