A few years ago, I was hired to improve the isolation of a new church being built in a residential area in Santiago, Chile, where they were concerned that their services would annoy the neighbors. They were right about that, and I did fix the isolation issue for them, but take a look at the interesting shape of the stage area: 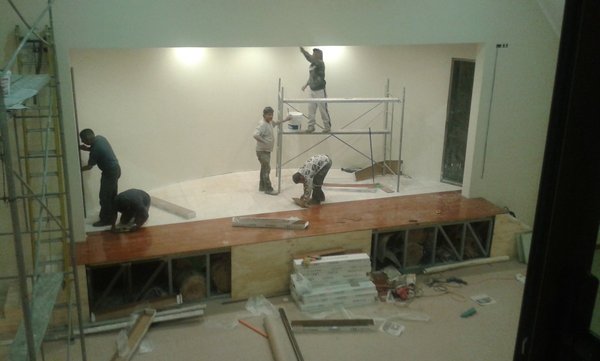 Yup! That's what the architect had come up with! A perfectly rounded, cylindrical section shape for the stage... and a rather small stage area, for a rock band... The church has a contemporary praise and worship band, with acoustic drums, keyboards, acoustic and electric guitars, bass, percussion, singers... and the Architect thought it would be a great idea to have a nice pretty round shape to the stage!

Actually, this is what it looked like on the very first day I walked in, to do the initial evaluation: 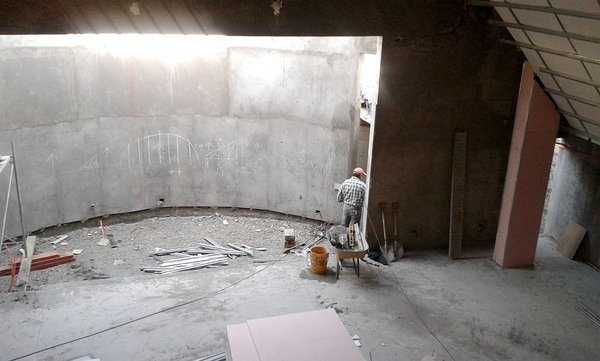 Yep, that's a solid reinforced-concrete wall. And also note the steep angle of the ceiling on the right hand side... A real fun place, acoustically...

I warned them just how bad it was going to be to have a live rock band in that curved shell... nobody had considered that. So they set up the band in there, to try it out, thinking that it would all be OK, and that I was exaggerating... The band members did their very best to play... and it sounded terrible! The pastor and other church leaders were all shocked at how bad it was, and the musicians were disgusted. They told the pastor flat-out that it would be impossible for them to play like that... and they really had tried very hard to keep it together. They complained bitterly... but of course it was way too late to change the stage, as the wall was already built, and it is structural (load-bearing): it holds up the roof...

In the end, the solution wasn't too hard to implement (see below), and the musicians ended up happy (as did the congregation!), but it goes to show just how poorly architects understand the basic concepts of acoustics, musicians, and music. Beware of architects that are all concerned about shapes and forms and aesthetics... but not about acoustics. 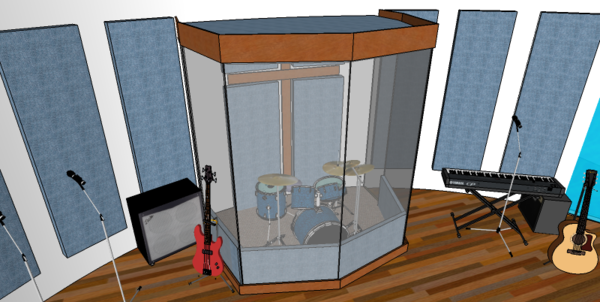 Carefully designed and tuned acoustic panels, in strategic locations, around the stage wall. As thin as possible, because the stage is so darn SMALL!

Here's the band, all happy again, trying out the prototype acoustic panels that I designed, and which solved the problem, allowing them to make heavenly music properly: 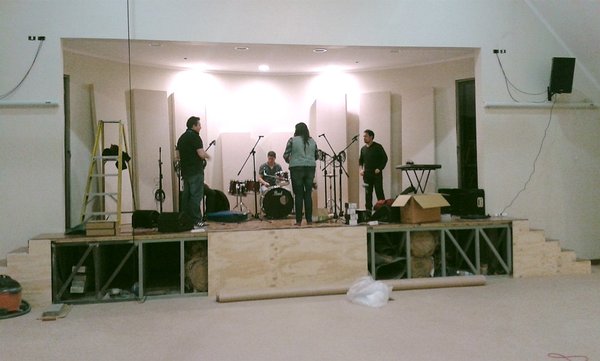 So what's the moral of the story? If you see this post, and you are planning a church or other similar performance hall, please do take into account that simple things like the shape of the stage can have a major impact on the final outcome of your worship space. Get an acoustician to work alongside the architect, and make sure that the room really can serve its purpose.

When they are planning their new facility, most churches never even consider the acoustic aspect of the sanctuary at all... until it is too late! Moving a few lines on a piece of paper in the design stage costs nothing. Moving around walls that have already been built, or implementing acoustic solutions, costs a lot more money...

My wife has been the leader and conductor of a small choir for many years. Those curved areas are great acoustic amplifiers and could amplify a small choir such that a PA was not needed. The churches I have seen with them in are all over 100 years old, predating electric instruments, amplifiers and PA systems.

endorka wrote:Among other issues, I imagine the lensing effect of that curve would put a terrible amount of instrument spill into the vocal mic, and the same would happen with the sound coming from the vocal monitor wedge? Feedback city.

Exactly. There was a point a few feet out from the front edge of the stage, presumably the focus of the curve, where the sound was screaming, but a couple of feet left or right of that you could only hear either the guitars or the keyboard... And on-stage, nobody could hear anybody else, or themselves. Depending on where you stood, you could hear one monitor wedge or another, or one instrument, or another, ... sort of ... but take a step to the side, and the entire picture changed. With nobody playing, just trying to talk to each other across the stage was impossible... unless you happened to be in just the exact right spot. It was impossible.

And then the slapback from the rear wall will return and get lensed into the vocal mic, and then the monitor wedge, etc. Slapback feedback city.

Oh yeah! The rear wall... ! More fun there... the rear of the room had a sort of balcony over maybe 4 or 5 rows of chairs, but it wasn't really a balcony above: it was closed in with glass, and they had offices up there. The glass and balcony was probably 3 m high in the middle, then the under-balcony area was maybe 3m high down below... well, 3m in the center of the hall, but going down lower on the sides, and extending back another few meters.... So plenty of slapback from the glass and no way of treating it, then a resonant cavern down below! And no treatment on the walls allowed... 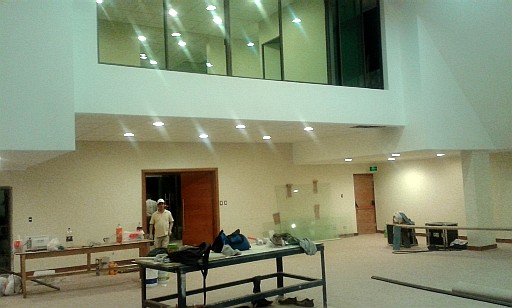 And of course, not much budget left over for treatment, and strong resistance to any panels on the walls of the main hall, nor on the heavily sloped ceilings, due to aesthetics. As part of the remedy for the hall acoustics I just specified heavily upholstered chairs with tall backs. Then careful sound system design to keep the direct sound off the walls and on the congregation. I must admit, it was an interesting challenge!

That was my suggestion, but the budget didn't stretch to in-ear system. All we got was four floor wedges, and control of the bass and electric guitar amps through the console.

Yup. I ended up with five speakers in there: L, C, R (on an LCR console, of course), then two under the rear balcony, everything with different delays and EQ, of course. I can't find the final images, but here's an early concept layout for the speakers. You can see the center cluster high up (which ended up being just one speaker... Budget...), then the main L and R up front above the projections screens (only possible place for them), then the balcony-fills on the edges of the part where the sides drop down. 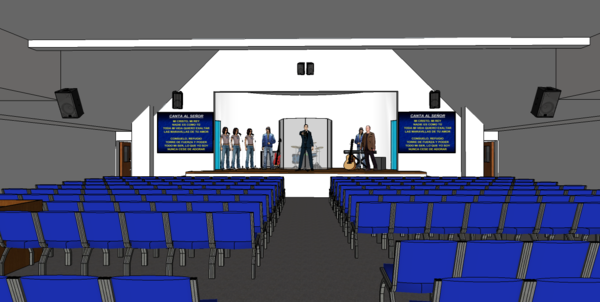 And below is a view of the not-quite-complete hall on inauguration day... They didn't quite make it to get the place finished for that day (hence the hanging cables, prototype panels, wrong drum booth, etc....). After that service was over, they pulled everything out again, and we re-did it properly, for the following Sunday. 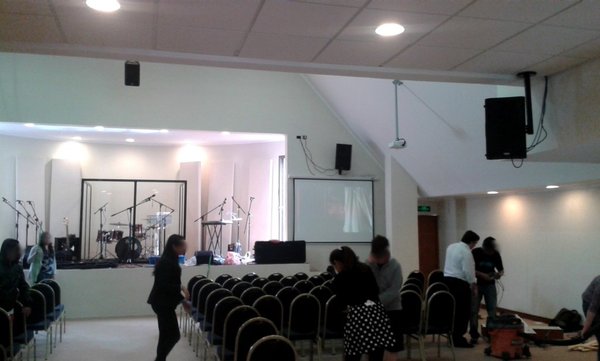 In the end, they were happy with the final result, and it sounded pretty good, with all the chairs in place and fully populated!

Very nice people, actually. It was fun to do that place! I just wished that they would have called me in sooner, while the basic design and the plans were still taking shape.

Nice, you did well to deliver a useful result there. I've played venues with similarly bad acoustics, and they seemed like the longest gigs ever. Not a musical experience at all - your ears tell you nothing, or even work against you due to the awful delays.

As you say it's unfortunate they didn't request acoustic involvement earlier in the design, but that and the low proportion of budget for acoustics seems common in the design of such spaces. The Glasgow Hydro concert venue is notorious round here, to the extent that many will not attend concerts there purely because of the terrible acoustics.

A couple of years ago Chris Whealy of porous absorber calculator fame visited me. He also had to cope with the acoustics of a church. He gave me the book withh the revealing title: Deaf Architects & Blind Acousticians.

I love it! Perfect! I must go find that book. (Hmmmm.... I'm wondering if I fall into the category of "Blind Acousticians".... maybe just a little bit....

Thanks for the suggestion, Bert. 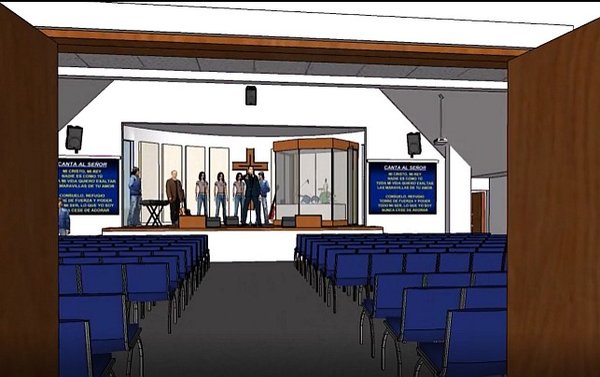 I was looking for somthing else earlier today, and accidentally came across a video animation I did for this church at one point. I did several such videos, as I normally do for a design process, but this specific one is from where I was working on the speaker layout and dispersion. That's what the colored cones are that appear and disappear at various points: I was checking that I was getting good coverage of all the seats. The speaker setup was a little convoluted, since its an LCR layout plus a pair of fill speakers under the rear balcony, with various delays and EQ issues, in addition to the coverage patterns, so I did this video to help visualize that. But you can also see the tiny, curved stage here, that the architect came up with. Very tight for the praise and worship band, and terrible acoustically. Note the panels I did for the curved wall there, to make the stage usable for them. We had a different layout for the stage at this point in the process: that changed later, as you can see in the photos above. You can also see the strange shape of the fall that I had to deal with (acoustic nightmare), and the reflective glass on the rear wall, above the balcony. Acoustic chaos. Architects!!!!

I'll see if I can find more videos and images of this place. Its an interesting case.

Users browsing this forum: No registered users and 0 guests